Please see below the Cleaning Processes employed by BJ's to enhance & Beautify your property. 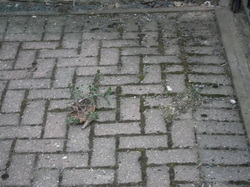 a. Surface Detritus & Litter - (Sweeping / Scraping / Treating -
It's already been revealed that the driveway has some areas of significant weed
growth and there is also the inevitable assemblage of litter, partly organic
such as dead leaves and grass clippings, and partly inorganic including a few
empty crisp packets etc.
Removing the loose litter is simply a matter of sweeping with a brush, rounding up all of
the debris and shovelling it into a bin. The weeds are another matter, though. Running a shovel or hoe across the surface would remove the top growth but would also leave the roots intact and some weeds are adept at growing back from a severed root. To eliminate the weeds once and for all, the driveway will need to be treated with a proven weed-killer several weeks in advance of the other works. The weed-killer may need more than one application.
Back in the old days, Sodium Chlorate was the weed-killer of choice for almost all ground-works or paving applications. It was cheap and it was effective. It was also pretty nasty to the environment and anyone coming into contact with it on a
regular basis and so it is more or less unobtainable nowadays. Further, the whole point of this case study is to show how a typical residential driveway can be refurbished by a typical residential driveway owner without relying on trade-only products or tools, and so the weed-killer of choice will be one that is readily available, ex-stock, from one of the local DIY sheds.
The weed-killer is a pre-mixed liquid supplied in a plastic dispenser with a spray attachment which is actually more of a hindrance than a help. The resulting spray is quite fine and, if there is the slightest breath of wind, it is whisked away to land anywhere but where you want it, namely on the paving. I suspect the spray is better suited to spot applications where a single offending dandelion needs to be dispatched, or to meet the highly optimistic coverage rates advertised by the manufacturer. For larger areas (this driveway covers roughly 100m²) application via the rose of a watering can may reduce the coverage but ensures the surface being treated receives a thorough wetting.

While the weed-killer deals a decisive blow to the majority of  the leafy weeds, it has little, if any, impact on the more troublesome algae  and lichens, and so for these bruisers, we rely on the time honoured 'dousing  with bleach' strategy.
Again, it might have been more effective to obtain a drum of  professional-grade sodium hypochlorite as used to chlorinate swimming pools,  but to keep with the DIY ethic, a few containers of a well-known household  bleach were sourced via the
local supermarket. This product claims to contain  around 5% sodium hypochlorite, which is the sort of dilution normally used  for algae-killing purposes, and so it was applied 'neat' and then scrubbed  into the surface using a stiff brush to help spread what is a rather gloopy  product designed to cling to the sides of the family bog rather than be  easily dispersed over a pavement.

Both the weed-killer and the bleach required repeat treatments, which validates the decision to carry out these treatments a few weeks before the other maintenance tasks. The weed-killer saw off the more weedy weeds, such as Yorkshire Fog grass and the mosses that colonise the joints, on the first attempt, but there were a few toughies, including a type of spurge which blows in from the neighbouring woodland and the hard-as-nails dandelions than frequent these parts, which
necessitated a repeat treatment. 5 days after the second application, there was no sign of green in any of the weeds. It was expected that the anti-algae bleach treatment would require more than one session, and in the end, a total of three
thorough soakings were used to make the algae curl up and die, or at least turn to a crispy shade of brown, and this also encouraged all but the most stubborn of the lichens to surrender. 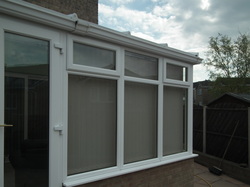 Guttering plays a very important part in protecting your property from the ingress of rain water and damp. Often difficult to reach sections are left un-maintained and once blocked with leaves, moss or other debris, the water is sometimes allowed to leak into your
property.
Many properties have benefited from installing maintenance free upvc fascia, soffit & guttering systems.  Although they no longer
require painting, from time to time they do get dirty and are prone to the growth of algae. This is one of the most noticeable areas of the property and reduces the kerbside or house sale appeal.
We are able to restore these areas to their former glory.
Alongside our window cleaning services we can give your property the 'wow' effect !
Proudly powered by Weebly